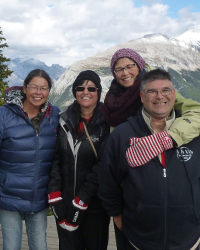 × Three Indigenous sisters and a brother—adopted as infants during the Sixties Scoop into separate, non-Indigenous families across North America—gather for the first time.

Plus short, The Mountain of SGaana: Haida filmmaker Christopher Auchter's film spins a magical tale of a young man who is stolen away to the spirit world, and the young woman who rescues him. The film brilliantly combines traditional animation with formal elements of Haida art, and is based on a story inspired by an old Haida fable.