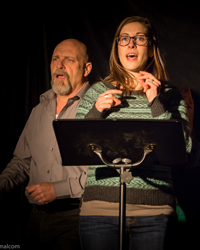 × Sometimes theatre can be a way to create a safe space for important conversations about complicated subjects.

One evening, ten-year-old Rhona goes missing. Her mother, Nancy, retreats into a state of frozen hope. Agnetha, an American academic, comes to England to research a thesis: “Serial Killing—A Forgivable Act?”. Then there’s Ralph, a loner who’s looking for some distraction. Drawn together by horrific circumstances, these three embark on a long, dark journey which finally curves upward into the light.

Angry, humane, and compassionate, this extraordinary play entwines the lives of a murderer, the mother of one of his victims, and his psychologist to explore our capacity for forgiveness, remorse, and change after an act that seems to rule them out entirely.

A staged reading is a thoroughly enjoyable way to experience a play. With no sets and costumes, engage your imagination to create the play in your own mind while hearing it read by talented actors.