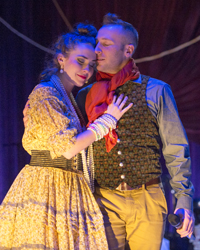 When was the last time a live performance swept you away? Inspired by a poem and opera from the 1800s in which handsome rogue Evgeni Onegin visits the Larin family estate (his romantic charms stirring passions long forgotten by its residents), Onegin creators Amiel Gladstone and Veda Hille have turned the story into a hit musical that’s a rock concert, back kitchen party, and love poem, all in one. The cast of seven, accompanied by a 3-person orchestra, will move, shake, and wake you. Plus, for this show only audiences can bring their drinks into the theatre. Get ready to raise your glass to love!

The show’s premiere in Vancouver in 2016 and remount in 2017 resulted in standing O’s from audiences and reviewers. The Georgia Straight said, “you’re lucky to be alive right now ... because you get to see Onegin.” On the musical's remarkable success, Gladstone and Hille say, “After Craigslist Cantata—a play about disconnection—we wanted to do something about connection, something romantic. Onegin felt like the perfect piece to adapt for modern audiences—because these characters’ missed opportunities show us what happens when we don’t embrace love when it comes to you.” Hille remembers, “When we started writing Onegin, I was ready to dive into grand romance. This show has let me feel things I haven’t felt in ages. Sprawling, messy feelings that led to soaring melodies and hot dreams and some pretty fervent singing.”

An Arts Club Theatre Company production | Book, music, and lyrics by Amiel Gladstone and Veda Hille | Based on the poem by Pushkin and the opera by Tchaikovsky